The literature research [7] says, that classification or prediction is the process of identifying a set of common features, and suggesting differentiating models that describe and distinguish data classes and concepts based on an example. Clustering: In Clustering, as known as cluster analysis the groups of objects, which have a similarity, are identified. The reason to choose the clustering procedure is, that some applications the class affiliation is not available or costly to identify [7]. So the task of Clustering is thus to assign the properties of a feature unclassified record a certain number of clusters [7].

Regression: The goal if regression analysis is similar to the classification technique above. The difference is only that in regression no classes are formed. According to DMG this function is used to determine the relationship between the dependent variable and one or more independent variable [8]. From the data of a production facility has been recognized, that a certain product parameters correlated very strongly with product quality; now is to find out how these parameters must be set to achieve a specific level of quality [9].

Prediction: Prediction is similar to classification. The difference is, that in prediction the exception applies, the results lie in the future. Neural networks and logistic model prediction are the most commonly used technique in prediction analysis. Visualization: Visualization refers to presentation of data mining results so that the users can view complex view in the data as visual objects in dimensions and colors [10].

So it is easier for the users to understand the complicated data in clear patterns and use it.

Outlier Detection: The aim of outlier detection is to identify data that are not compatible with rest of the dataset. It is one of the most fundamental issues in data mining. A commonly used technique for outlier detection is the discounting learning algorithm [2]. The authors of the first articles proposed a novel hybrid approach for under- sampling the majority class in largely skewed unbalanced datasets in order to improve the performance of classifiers [12]. Against that GMDH achieved So it is clear that the proposed hybrid undersampling approach performed better than a original unbalanced data presented [12].

Bhowmik [13] present a confusion matrix of model applied to test data set. In his paper he provide a matrix with two classes with four possible outcomes of the classification to identify frauds. First is true positive, second false positive, third true negative and the last one false negative. To view and understand the output he recommends visualizing the output. 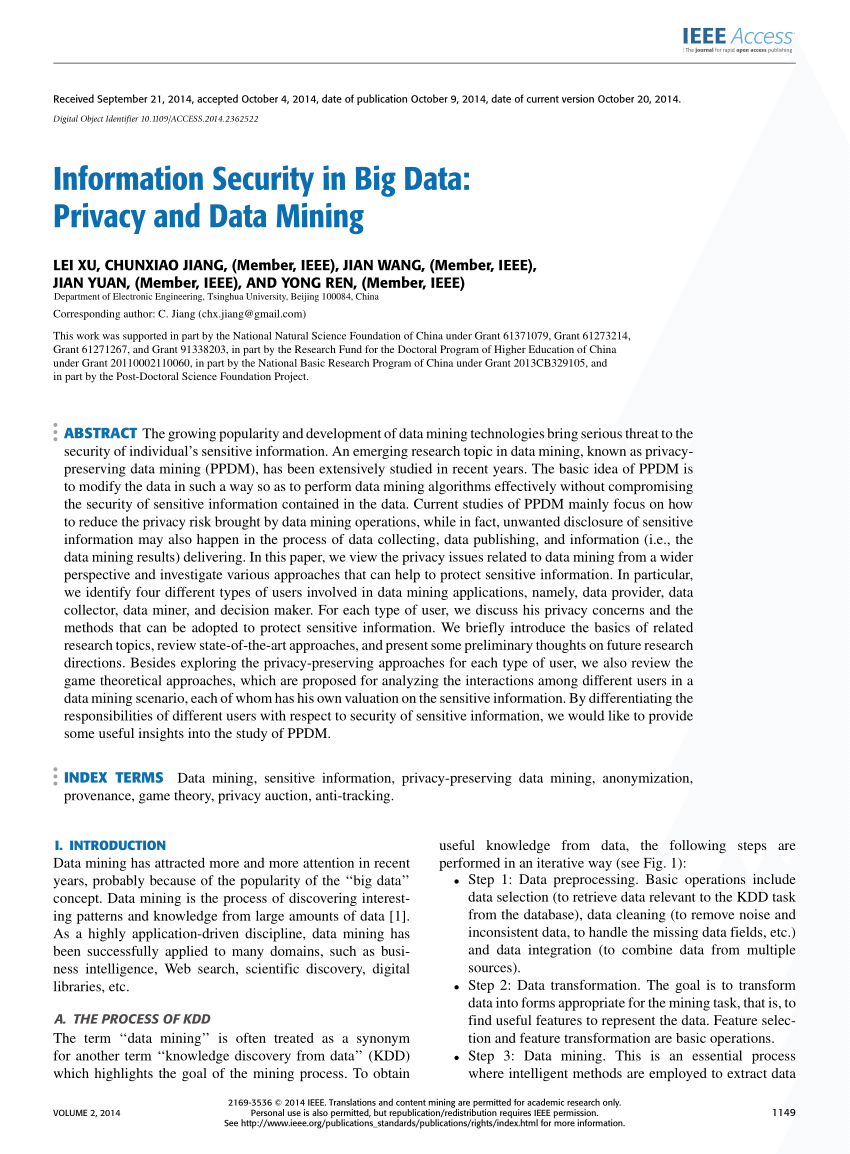 Attribute columns graphs in neural networks to find the significant attributes and DT visualization to builds trees by splitting attributes from C4. This article [14] is about to develop a model for detecting cases of prescription fraud. A novel model is proposed for detecting cases of prescription fraud. Using a data mining approach dividing the six dimensional features into several 2 dimensional sub-domains [14]. The result is, that the automated fraud detection methodology gives considerably compatible results with the human expert auditing [14].

Based in the performance measurements with a true positive rate of The author of this article [15] performs an analysis using data mining methods to detect fraud in healthcare insurance. For the anomaly detection analysis he used the data mining technique SVM that is performed on an Oracle system.

For the results he describe a data mining software that calculates the probability of the anomaly of each record [15]. For the analysis, the author presents 3 different criteria in this article. First criteria the Rejected claims, second the Excessive claims in health center types and the last Excessive claims in health centers. Data mining techniques in financial fraud detection Seminar Paper, 12 Pages, Grade: 1. R A Rohan Ahmed Author. The discount is offered for articles published in over subscription journals and over full open access journals.

How this list was negotiated could be interesting. A similar list of journals, which was compiled in a comparable deal in the Netherlands, is said not to have been loaded with high-quality journals.


Furthermore, it is unlikely that Elsevier will reduce the subscription costs of journals as their Open Access share increases. It should also be noted that Elsevier publishes almost twice as many journals, 2, : Therefore, Finnish researchers can neither read all Elsevier journals nor publish Open Access in all of them at reduced prices. Brief summary: Elsevier has a growing market share generated by library funds and highly cited journals produced by scientists , so it is advisable to sign further contracts with Elsevier.

While in Germany the boycott of the publisher Elsevier which was initiated by the DEAL project continues, an agreement was reached in Finland between Elsevier and the FinElib consortium, but the details are still unclear. Ultimately, the decision is naturally up to your own discretion. The NoDealNoReview campaign tried to persuade scientists to stop being a reviewer for Elsevier in order to increase the pressure on the publisher and thus achieve a cost-effective consortium agreement. Therefore the campaign has to end alongside the negotiations.

Individual researchers are more than welcome to continue their boycotts.


There is ample justification for doing so, as Elsevier remains the leading force of resistance in terms of openness and fair costs. With regard to Germany, it would be extremely interesting to know the precise conditions under which the agreement was reached: Did the publisher really give a significant price drop?

Did Elsevier enforce his price expectations? Or did FinELib and the publisher simply agree on a armistice where both sides could keep face? The results are published on OpenAccess. The University of Stockholm has spent 2.

The data show that these four publishers have received more than half of all paid APCs, 1. If one considers frontiers as part of Springer Nature, the share increases to As mentioned several times in this blog the German project DEAL aims to conclude nationwide licensing agreements for the entire portfolio of electronic journals from major academic publishers.

DEAL has two distinctive goals: on the one hand, cost savings and, on the other hand, the extension of contracts to include Open Access components that allow scientists at German institutions to publish Open Access in journals of contract partners at no extra charge. The arbitrarily high prices put a strain on the acceptance of the division of labour between science and publishing. The academic libraries are increasingly forced to restrict their services. This results in a growing danger for the scientific discourse in the specialist disciplines. This is the only way to ensure that current research results are fully accessible.

Publishers must adapt their business models to these possibilities of digital publishing. A similar boycott , led by recognized mathematicians, was launched as early as The migration is motivated by the acquisition of Bepress by Elsevier. In their acquisition of bepress and other companies like SSRN and Mendeley, Elsevier demonstrates a move toward the consolidation and monopolization of products and services impacting all areas of the research lifecycle.

We are worried about the long-term impacts from these acquisitions and are concerned that such changes are not in the best interests of the library community. Therefore, we feel obligated to begin exploring alternatives. Today Elsevier published its vision of Open Access, written by Gemma Hersh, and suggests a route that is neither green nor gold, but a mixture of it, one could say blue Open Access: Articles published by European institutions should be available Gold Open Access within Europe and — if deposited on a repository — Green Open Access outside of Europe.

Ulrich Herb Here are the main points: Most surprising: This agreement provides for a gradual There will also be a compensatory clause if these APCs increase by more than 3. Excluded from this discount are — as I understand it — only the society journals, e. The Lancet and the Cell Press titles. Included are all Open Access journals and hybrid journals. It is parabolic and non-linear generalization of the Calderon-Zygmund theory for the Laplace operator. The two main results are local BMO and Hoelder estimates for the inhomogenious p-Laplace and the parabolic p-Laplace system.